From Times of Israel: 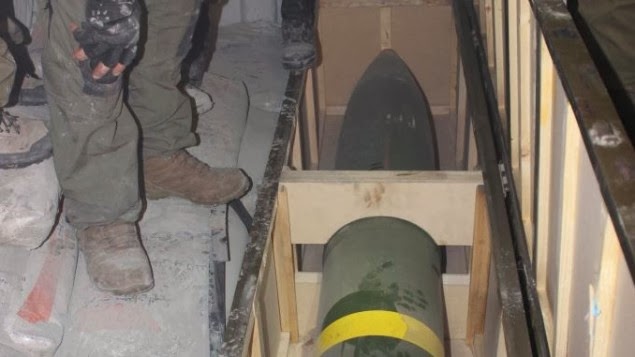 IDF soldiers inspect a missile found on board Klos-C in a commando operation Wednesday morning. The military says the ship was carrying an Iranian arms shipment headed for Gaza (Photo credit: IDF)


Israeli naval commandos from the elite Shayetet 13 unit boarded and took control of the “Klos-C” merchant ship, sailing under the Panama flag, at around 5 a.m. They encountered no resistance and there were no casualties reported on either side.

The army said soldiers carried out a preliminary inspection of the ship and found several dozen advanced Syrian M-302 missiles, with a range of up to 200 kilometers (125 miles) and a payload of up to 170 kilograms (375 pounds). The missiles were hidden in shipping containers also carrying sacks of concrete.

The incident took place 1,500 kilometers (930 miles) from Israel’s coast, in the Red Sea, off the Sudanese-Eritrean border. Israel had been tailing the ship for several days before the operation was launched....

Israel, PA Get Copies of Kerry’s Proposal
by Maayana Miskin

Copies of the proposal have reportedly been given to Prime Minister Binyamin Netanyahu and to chief PA negotiator Saeb Erekat.

The report has not yet been confirmed by officials on either side.

The Kerry proposal has been the subject of speculation over the past several weeks. Journalist Thomas Friedman reported in January that Kerry’s deal includes a PA capital city in eastern Jerusalem and would create a PA state in Judea, Samaria and Gaza with borders based on the 1949 armistice line.

The deal would require the PA to recognize Israel as the state of the Jewish people, and to give up the demand for the “right of return” to Israel of descendants of Arabs who fled the country during the War of Independence in 1948.

Friedman’s report contradicted an earlier report from Xinhua which said Kerry had proposed the “return” of 80,000 Arabs to Israel.

There has been concern in Israel that Kerry plans to “attack” Netanyahu with heavy pressure, and coerce him into accepting terms that will be bad for Israel’s security, including a withdrawal from the Jordan Valley. Likud MKs have warned that if Netanyahu were to give in to Kerry, it would mean the end of his party – and new national elections.

U.S. President Barack Obama has reportedly promised Netanyahu that his administration will expect concessions from the PA, as well.

Medea Benjamin was busy elsewhere, and unavailable for comment.