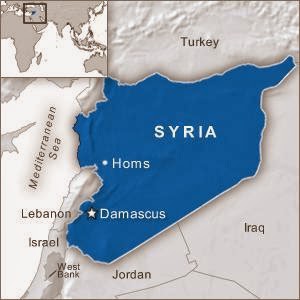 Remember Syria?   Yes, the murdering is ongoing -  crossing so many imaginary red lines -  and the humanitarian crisis continues.

Now, from Jihad Watch comes this:

This is the kind of math that the “Palestinians” have taught the world in their prisoner exchanges with Israel. In any case, kidnapping infidels and releasing them for ransom or killing them, as well as exchanging them for Muslim prisoners if that option is deemed most advantageous for the Muslims, is fully sanctioned in Islamic law: “As for the captives, the amir [ruler] has the choice of taking the most beneficial action of four possibilities: the first to put them to death by cutting their necks; the second, to enslave them and apply the laws of slavery regarding their sale and manumission; the third, to ransom them in exchange for goods or prisoners; and fourth, to show favor to them and pardon them. Allah, may he be exalted, says, ‘When you encounter those [infidels] who deny [the Truth=Islam] then strike [their] necks’ (Qur’an sura 47, verse 4)” — Abu’l-Hasan al-Mawardi, al-Ahkam as-Sultaniyyah (The Laws of Islamic Governance), trans. by Dr. Asadullah Yate, (London), Ta-Ha Publishers Ltd., 1996, p. 192.

Sunni Islamist rebels in Syria have claimed responsibility for kidnapping at least 94 women and children belonging to President Bashar al-Assad’s minority Alawite sect, according to a video published on Thursday.

The civilians were abducted in August from villages in rural Latakia, the president’s coastal stronghold. The rebels said they were holding the hostages to secure the release of opposition supporters from government detention.

Thousands of people are thought to be imprisoned by both sides in the increasingly sectarian civil war, which enters its fourth year this month....

The mainstream media may have moved on, but for the civilians in Syria, the hell continues.

Is ANYbody paying attention?