The Times of Israel:

Netanyahu on Obama’s critique: I won’t give in to pressure

Hours after president warns US will be hard-pressed to protect Israel if peace talks fail, PM says Palestinians are at fault 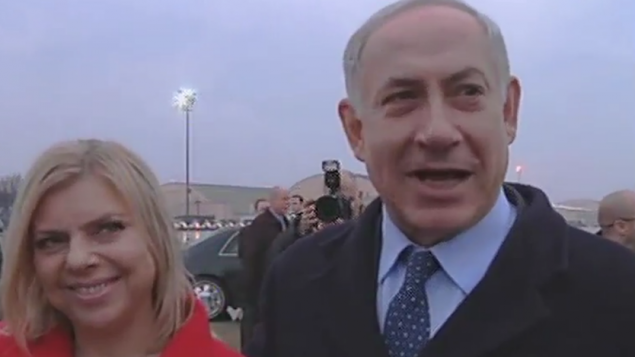 Prime Minister Benjamin Netanyahu, wife Sara at his side, responds to President Barack Obama's criticism on his arrival in the US, March 3, 2014 (photo credit: Channel 2 screenshot)

Blame for the morass in the Middle East peace process lies squarely with the Palestinians, Prime Minister Benjamin Netanyahu said late Sunday, hours after US President Barack Obama was quoted saying that Washington would be hard-pressed to defend Israel should talks fail.


Netanyahu made the remarks upon landing in Washington, where he was to meet Monday with Obama, Vice President Joe Biden and Secretary of State John Kerry, who is managing negotiations between Israel and the Palestinians. Netanyahu and Kerry will also speak at the conference of the AIPAC pro-Israel lobby in the capital.

“The tango in the Middle East needs at least three,” Netanyahu said in a statement to the press. “For years there have been two — Israel and the US. Now it needs to be seen if the Palestinians are also present,” he said.

“In any case, in order for us to have an agreement, we must uphold our vital interests. I have proven that I do so, in the face of all pressures and all the turmoil, and I will continue to do so here as well,” he said....


From Israel Ministry of Foreign Affairs:

An Update From PM Netanyahu & President Obama's Meeting at the Oval Office:

Full remarks by Prime Minister Netanyahu before his meeting with President Obama in the White House this afternoon:

Mr. President, I appreciate the opportunity to meet with you today, especially since I know you've got a few other pressing matters on your plate. During the five years of your presidency, you and I, and Israel and the United States have worked very closely on critically important issues -- security, intelligence-sharing, missile defense -- and we're deeply grateful for that.

I look forward to working closely with you in the years ahead to address the main challenges that confront both our countries, and of these, the greatest challenge, undoubtedly, is to prevent Iran from acquiring the capacity to make nuclear weapons. I think that goal can be achieved if Iran is prevented from enriching uranium and dismantles fully its military nuclear installations.

Now, Mr. President, if that goal can be achieved peacefully and through diplomacy, I can tell you that no country has a greater stake in this than Israel. Because, as you know and I'm sure you'll appreciate, Iran calls openly for Israel's destruction, so I'm sure you'll appreciate that Israel cannot permit such a state to have the ability to make atomic bombs to achieve that goal. We just cannot be brought back again to the brink of destruction. And I, as the Prime Minister of Israel, will do whatever I must do to defend the Jewish state.

We're also going to discuss the peace process, as you said. I want to thank you and Secretary Kerry for when I say tireless efforts, I mean tireless efforts that he has put into this quest, as you are.

It's an opportunity to congratulate Secretary Kerry on the birth of his new granddaughter. Mr. Secretary, you may not be aware of this -- but the news of the new granddaughter came to Secretary Kerry while we were discussing the peace process. So we've had many productive meetings, but this is truly a productive meeting. (Laughter.) And so I thank you both for you efforts and your team's.

The 20 years that have passed since Israel entered the peace process have been marked by unprecedented steps that Israel has taken to advance peace. I mean, we vacated cities in Judea and Samaria. We left entirely Gaza. We've not only frozen settlements, we've uprooted entire settlements. We've released hundreds of terrorist prisoners, including dozens in recent months.

And when you look at what we got in return, it's been scores of suicide bombings, thousands of rockets on our cities fired from the areas we vacated, and just incessant Palestinian incitement against Israel. So Israel has been doing its part, and I regret to say that the Palestinians haven't.

Now, I know this flies in the face of conventional wisdom, but it's the truth. And the people of Israel know that it's the truth because they've been living it. What they want is peace. What we all want fervently is peace. Not a piece a paper -- although that, too -- but a real peace; a peace that is anchored in mutual recognition of two nation states that recognize and respect one another, and solid security arrangements on the ground.

And I hope President Abbas does this, as I hope that he'll take seriously Israel's genuine security needs. Because, as you know and I think everybody does, in the Middle East, which is definitely the most turbulent and violent part of the Earth, the only peace that will endure is a peace that we can defend. And we've learned from our history -- Jewish history, but I think from general history -- that the best way to guarantee peace is to be strong. And that's what the people of Israel expect me to do -- to stand strong against criticism, against pressure, stand strong to secure the future of the one and only Jewish state.

And I think there is a partnership there, a partnership between Israel and America, that I think is important for this end. I want to thank you again for your friendship and your hospitality, and the warmth you've shown me on the snowy Washington day. I thank you. It's good to see you again.

Email ThisBlogThis!Share to TwitterShare to FacebookShare to Pinterest
Labels: Netanyahu meets with Obama