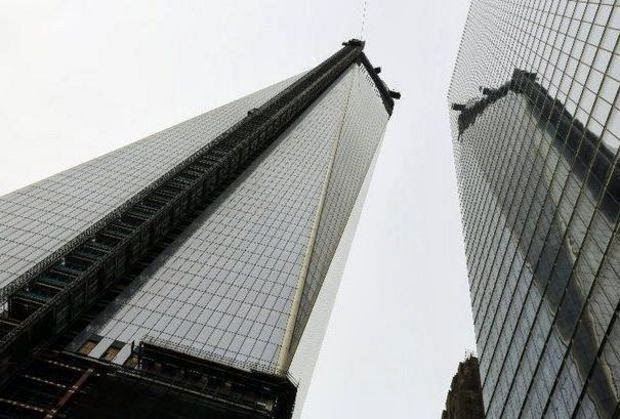 1 World Trade Center is seen on the left. Security officials don't want to install a security system for the building because of extra costs, a report said. (John Munson/The Star-Ledger)


Recently, two separate incidents highlighted just how vulnerable the 1WTC is to terrorists.  A teenager managed to evade security last week, which prompted TIME: The daring climb raises questions about the security of America's tallest building.  Noooooo kidding..  In September last year, there was the case of three skydiving from the WTC....They were arrested this week.  Go and check out this report (with video) on USA Today.

Now, the New York Post tells us that yes, there is a security system for this building 'but it’s still sitting in its box in a back office because they didn’t want to pay extra for installation'......Really??????  Go read the rest on that.

A "well-placed source" told the Post the $4,000 security system is still sitting in a back office because the Port Authority expressed frustration with paying extra for installation. A report from the Post found that there isn't a single working security camera inside the building.

"He (a Port Authority official) looked at me and my colleague and said, 'Why did I spend $4,000 on this equipment when you could have gone to Home Depot and gotten something cheaper?'" the source told The Post. The source is a veteran electrician who worked on the project for the vendor, Angel Electronics, the report said.

"I was kind of stunned, because that's a pretty bold statement to make considering we got the specs from them, and the Port Authority had it made to order," the source told the Post....

Oh and about those terrorists that Obama refuses to admit still pose a threat to us here?

A joint inquiry co-chaired by a former senator has warned that the American network that supported and trained the 9/11 hijackers was never fully dismantled, and that it remains a threat, pending the release of a secret report from the era. Former Senator. Bob Graham (D-Florida) points out that a 28-page section from the “Joint Inquiry into Intelligence Community Activities Before and After the Terrorist Attacks of September 11, 2001” was classified under President George W. Bush and remains so under President Barack Obama.

If that's not enough to concern you, last month I found this from Clarion Project:

FBI documents obtained by Clarion confirm the find and show the U.S. government’s concern about its links to terrorism.

A Clarion Project investigation has discovered a jihadist enclave in Texas where a deadly shooting took place in 2002.


The organization says it has a network of 22 “villages” around the U.S., with Islamberg as its main headquarters in New York. The Clarion Project obtained secret MOA footage showing female members receiving paramilitary training at Islamberg. It was featured on the Kelly File on FOX News Channel in October. A second MOA tape released by Clarion shows its spokesman declaring the U.S. to be a Muslim-majority country.

A 2007 FBI record states that MOA members have been involved in at least 10 murders, one disappearance, three firebombings, one attempted firebombing, two explosive bombings and one attempted bombing. It states:...


My long time readers know I am no rabid conspiracy theorist, BUT given the two recent incidents linked to above; given the documented proof of what is coming across US borders every day, and claims of "22 villages around the US," it is beyond time for the current crop of politicians to get serious about the ever-present threat of terrorism in America. Anybody who pays any kind of attention to what is going on, has to know how deadly serious the terrorism threat remains - to all of us..


I am on the record as saying I believe there WILL be another terrorist attack within our borders. The two most recent incidents tell me that we have learned nothing from 9/11. If we choose to ignore such glaring lacks of security as detailed above, we WILL live (if we are lucky) to regret that we refused to pay a really 'hefty' price.


Those who ignore history are doomed to repeat it.

Related: Trespassers at 1WTC are a wake up call
Posted by The Brat at 4:20 PM

You betcha! not a question of "where"
but when
the PAPD had better step up and take over security. If 2 idiots in 2 weeks can get in there, we know it will be a piece of cake for the real bad guys....."just saying"