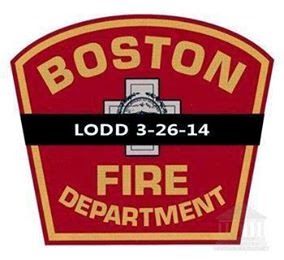 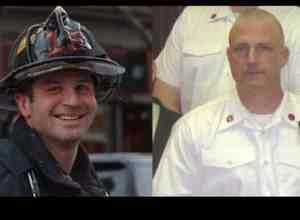 By Paige Sutherland
The Associated Press

BOSTON — Boston residents mourned the deaths of two firefighters who were killed when a fire driven by strong winds whipped through a brownstone and trapped them in the basement in a neighborhood just blocks from where nine city firefighters died in a 1972 hotel collapse.

Tributes poured in Wednesday for Lt. Edward J. Walsh, a 43-year-old father of three who had almost a decade of experience, and firefighter Michael R. Kennedy, a 33-year-old Marine Corps combat veteran who had been a firefighter for more than six years.

Thirteen other firefighters were injured in the blaze in the city's Back Bay district, and several police officers also were taken to hospitals. Some residents were rescued from the upper floors of the four-story apartment building, but none was hurt, city officials said.

"In 30 years I've never seen a fire travel that fast, escalate that quickly and create such havoc in such a short period of time," [Deputy Fire Chief Joseph Fin] said.

Finn said Walsh and Kennedy had gone down inside stairs into the basement, and he assumed that a front window broke out and blew the fire back at them. They called a mayday within two or three minutes of entering the building.

Kennedy was found about 30 minutes later and was pulled from the building but was pronounced dead at a hospital. Walsh's body was recovered later and was removed in what fire department spokesman Steve MacDonald described as "a very solemn ceremony," in which he was carried on a stretcher out the back of the building through a line of saluting firefighters....

The Boston Globe has many more details and a video of various Fire Officials' responses..

On Wednesday, Walsh, a 43-year-old married father of three young children, and Kennedy, a 33-year-old Marine Corps veteran, had made their way down stairs to the basement when a front window broke, intensifying the blaze, authorities said. Just minutes after entering the building, they were trapped in the cellar, prompting a frantic mayday call.

“We’re in the basement,” one of the men said. “Please come and get us.”

“We lost two heroes here today,” Mayor Martin J. Walsh said at the press conference. “These two heroes ran into a burning building and got people out.”

In a statement, the mayor said words “cannot do justice to the grief that we feel tonight.”

“Our hearts are heavy with the knowledge that these brave men gave their lives to protect the safety of our city and its people,” he said. “A day like today makes us all too aware of what they are risking in the course of doing their jobs. They are heroes simply by virtue of accepting this duty.”...


Related:  Their singular calling is ingrained for life


There is a fund set up to support the families. From the City of Boston official site:

BOSTON -- The Boston Firefighter's Credit Union has created a fund to help support the families of Lieutenant Ed Walsh and Firefighter Michael Kennedy.

"In difficult times like these, I am so proud to be mayor of a city that comes together to help our neighbors in need," said Boston Mayor Martin J. Walsh. "Since yesterday's tragic events, we've experienced an outpouring of support from across the city, state, and country. So many people have expressed a willingness to help, in some way, as we grieve the loss of Lieutenant Walsh and Firefighter Kennedy."

"Although no donation can heal the wounds suffered by the Walsh and Kennedy families, we are grateful to the Boston Firefighter's Credit Union for helping us create a focal point for peoples’ generosity, and to the people of Boston, of Massachusetts, and of the United States, who have once again shown the power of a community to help healing process begin."


As the Mayor said:

“A day like today makes us all too aware of what they are risking in the course of doing their jobs. They are heroes simply by virtue of accepting this duty.”...


Indeed they are. My heart and my prayers of sorrow and gratitude are with their families and their Fire Department family across the land.